How many times have you heard a friend or family member advise that it is best not to get involved between a man and his woman?  Unfortunately, for many battered women in the Dominican Republic, this hands-off approach is perpetuating the vicious cycle of domestic violence that is shrouded in silence and secrecy.

Domestic violence exists for Dominican women across all economic strata. El Centro de Estudios Sociales y Demográficos reported that one in every three women you know in the Dominican Republic are victims of some form of domestic violence. Although this country is known as one of the finest vacation resort meccas of the world, the Dominican Republic is grappling with an issue that is not so publicly glorious and refined. Behind the façade of gorgeous beaches and exquisite holiday accommodations, many of this country’s precious flowers face a violent and brutal existence. The truth is that many of the women who serve as well as visit these fine resorts are indeed victims of violent attacks by manipulative and controlling husbands and partners.

As this Latina researcher examined the ugly truth behind the reality of domestic violence in the Dominican Republic, I was horrified to see how little is done to eradicate this brutal reality.  A study by the Association of Women’s Rights in Development confirmed that many Dominican women face this lonely battle and are often victimized twice, by their abusers and by the judicial system created to protect them. In 2011, data from the Prosecutor for Woman Affairs (Roxanna Reyes) confirms that every 1-2 days a woman is killed in an act of domestic violence. Within the last two years, over 60,000 annual complaints of violence against women are reported. However, approximately only 4% of the charges, brought up against the perpetrators, attended legal trials. Recently, official statistics from the capital’s Santo Domingo Public Prosecutor’s Office confirms that the alarming level of domestic violence continues.  In the past 6 months, this province had 133 women killed by their former partners. An advocacy study, Critical Path of Dominican Women Survivors of Gender Violence commissioned by local Dominican women advocacy organizations, reported that tragically many of the victims that lost their lives were also victims of a legal system that did not have a responsive judicial staff equipped to deal with the complex issues of domestic violence.

In the 21st Century…how is this possible? If you can believe it, domestic violence in the Dominican Republic was not officially recognized until January 1997 under the new human rights law 24-97. Until this point, domestic violence was not only tolerated…it was considered legal. The reality of domestic violence in the Dominican Republic was brought to light by organizations such as PROFAMILIA (Asociación Dominicana Pro-Bienestar de la Familia) y La Oficina para la Promoción de Mujeres with the help of the United Nations Fund. It is difficult to believe that 15 years later, the efforts of human rights organizations have fallen on deaf ears.  An investigation by the Inter-American Commission on Human Rights reveals that even though the 24-97 law was intended to promote major advances in the protection of women’s rights in this nation, regrettably many Dominican judges do not apply and enforce the law. A commission investigated the knowledge base of many judges and Public Ministry representatives and they were simply unaware of the extensive content of this 15 year-old law. How is this possible? Perhaps the ugly truth may be that many of the male judges and law enforcement counterparts elect not to enforce it.

The ultimate goal of domestic violence or abuse is to gain and maintain control of the victim. Fear is the paralyzing grip that keeps many victims in an abusive relationship. Regrettably many people who hear about a particular example or tragic case can’t believe why the woman never broke free from the abusive situation.  As a community, noticing and acknowledging the critical and escalating signs of an abusive relationship can serve as the crucial step in breaking the cycle and silence of domestic violence. It is important to understand that there are many forms of domestic abuse or spousal abuse. Based on a survey developed by the United States National Domestic Violence Network, if you answer “Yes” to many of the questions below, it is highly probable that you or someone you know is in an abusive relationship. Do you…

Many of the aforementioned questions focus on the issue of emotional abuse. Many victims feel isolated, intimidated, and controlled by their spouse/partner. It is important for victims of domestic abuse to understand that ultimately the abuser will escalate in his abusive tactics and ultimately resort to physical threats or other abusive repercussions to make the abused woman do what he wants.

PROFILE OF AN ABUSER:

A domestic violence abuser behaves in a controlling manner, not because he is not able to “control” himself.  In fact, the abuser is very strategic about his actions and makes very clear and controlling decisions in order to control his spouse or partner. He makes careful choices about when and where he will abuse his partner.  In public, they may seem like the perfect spouse, but often times will lash out when they can’t be seen. Moreover, an abuser is capable of “stopping” their abusive ways when it benefits him. If you suspect that someone you know is an abuser, answer the following questions. Does your partner…

THINGS TO KEEP IN MIND…

The dynamics of domestic violence are very complicated and it helps to explain why victims struggle to break free from this violent pattern. Many women do not feel equipped or brave enough to examine potential options that can free them from the abuse.  They have become emotionally, physically, and spiritually weak.  Remember that the abuser has used a litany of vices to pin the victim and maintain her under his control.

Dominican women are not alone.  The reality is that there are many Latina sisters who are suffering the same phenomena of domestic violence.  Amnesty International (2012) reported that in Latin America, there is a 20% increase in the number of women killed by their partners or former partners. The sad truth is that women are not the only victims.  When children witness the violent abuse of their mothers, there is a strong chance that they will either become victims or abusers in their adulthood. The cycle of domestic violence is more likely to continue.  It takes a brave and supportive community to say “NO MORE” and sustain empowerment that breaks the silence and the cycle. Thankfully, more Dominican organizations are addressing this issue and there is a growing network ready to serve the Dominican community.  For more information about these organizations, visit the following website http://santodomingo.usembassy.gov/victims_of_crime-e.html

Together, one step at a time, we can break the silence and the cycle that have kept so many women and children oppressed by their abusers. 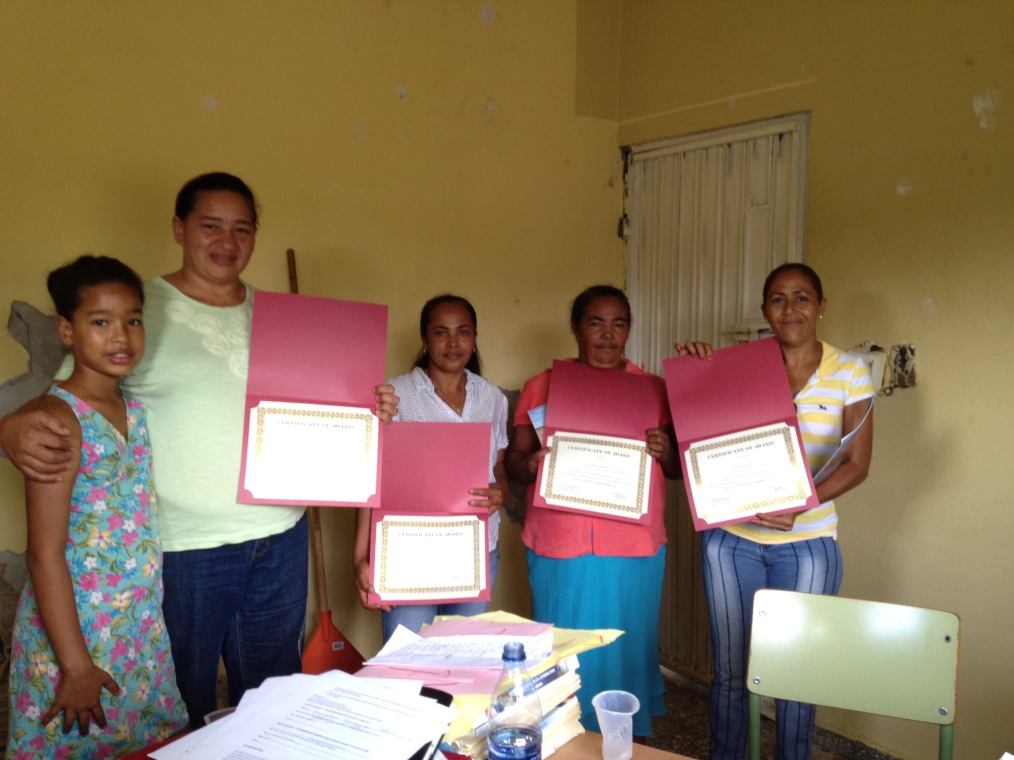